WIRE alert: human rights news from around the world

In this issue we report on police accountability in Nigeria and the Dominican Republic, refugees and asylum-seekers caught up in Libya’s internal conflict and discrimination against lesbians, gay men and bisexual and transgender people in Turkey.

Follow our campaign actions on ending violence against women and read our interview with human rights defender Pat Bennetts, who talks about her long campaign to end impunity for crimes committed against her brother in Chile in the 1970s. 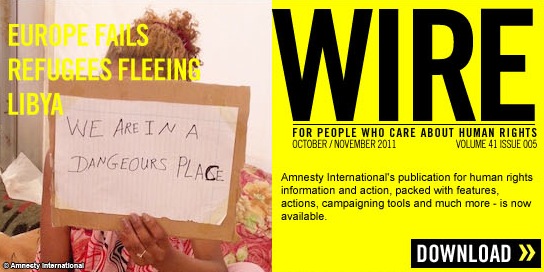 Above: An asylum-seeker at the Saloum Border Post, Egypt, July 2011. Thousands of asylum-seekers or refugees who were living in or transiting Libya have been displaced again since the conflict broke out there. © Amnesty International

Demonstrating against the abortion ban in Nicaragua, 28 September 2011 (c) Fondo Centro Americano de Mujeres
By Stephanie Schlitt, Amnesty International’s Researcher and Policy Advisor on Gender
Today, at the United Nations General Assembly, the UN’s expert on the right to health, Anand Grover, will present a ground-breaking report. The report exposes how states are putting women’s and girls’ lives and health at risk through criminal laws and other misguided legal restrictions that deny girls and women access to sexual and reproductive health information and services and the ability to make decisions about their sexual and reproductive lives.
The report concludes that restrictions on abortion and contraception, the criminalization of pregnant women’s conduct (such as making drug use when pregnant a criminal offence), as well as restrictions on access to information on sexual and reproductive health violate girls’ and women’s rights to sexual and reproductive health. This report supports earlier UN expert findings that such laws place states in breach of their international human rights obligations.
For almost eight years at Amnesty International I have worked to support research and campaigning on gender-related issues. I am in the middle of my first pregnancy just now. Being here at the UN to see this report being presented feels all the more poignant because of this. As I read the report, my thoughts turned to the girls and women all over the world whose experience of sexuality and reproduction is shaped by laws and policies that allow the state, and the people around them, to subject them to pressure, fear, intimidation, pain, suffering and punishment.
In Indonesia Amnesty International’s research has highlighted a number of legal provisions, including in the Criminal Code, which restrict access to sexual and reproductive rights, or have a chilling effect on the provision of sexual and reproductive health information and services. Some Indonesian activists expressed particular concerns about the new Pornography Law (No. 44/2008) which they said could prevent them from disseminating information on sex education free from the threat of criminalization. One activist told Amnesty International: “If people feel uncomfortable and think I am promoting sex, this can be a problem… it always depends on community leaders… if they are very fundamentalist then there is a high chance [we will be arrested].”
In 2008, draconian legal provisions came into force in Nicaragua which criminalize abortion in all circumstances. As one weary Nicaraguan doctor told an Amnesty International researcher: “Doctors’ hands are tied… we are anxious even about treating a miscarriage, for example.” The situation is so desperate that the Inter-American Commission on Human Rights demanded that the Nicaraguan government provide medical treatment to “Amalia”, a young woman suffering advanced cancer. She had been denied the treatment she needed because the 2008 law criminalizes even unintentional harm to the foetus, a risk that her treatment for cancer entailed.
The UN expert’s recommendations echo calls made by international human rights bodies and public health experts. But most importantly, the report reflects the demands of girls and women and those active for the protection of their human rights. On 28 September, hundreds of Nicaraguans marched against the abortion ban. Two young girls held a banner saying “Motherhood: Only if I can and only if I am willing.” Amnesty International supports their demand. So does the Special Rapporteur in his report. Let’s hope more governments hear these voices, adhere to their international legal obligations and take the actions recommended in the report presented today!

Posted by Respectable at 7:37 AM No comments:

Myanmar: Release all prisoners of conscience

Posted by Respectable at 7:28 AM No comments:

Pakistan: The agony of waiting for the disappeared

Posted by Respectable at 7:52 PM No comments: 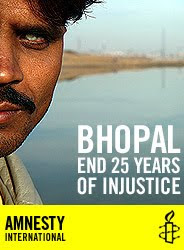 
Shortly before midnight on 2 December 1984, thousands of tonnes of deadly chemicals leaked from Union Carbide’s pesticide plant in Bhopal, central India. Around half a million people were exposed. Between 7,000 and 10,000 people died in the immediate aftermath and a further 15,000 over the next 20 years.

As the factory site has not been cleaned up yet, more than 100,000 people in the area continue to suffer from health problems. Efforts to provide rehabilitation – both medical care and measures to address the socio-economic effects of the leak – have fallen far short of what is needed and victims still wait for the adequate compensation. The people of Bhopal have struggled to obtain even basic relief such as clean water. Over the past 25 years, the Indian government has shown its incapacity to deal with the issue as companies involved have evaded accountability and obstructed the efforts of victims to secure reparation.
Take Action

Posted by Respectable at 6:29 AM No comments:

Love , Peace and a colourful Harmony

I have started this blog with intention to spread the message of Love , Peace and a colourful Harmony. I defend Freedom of expression and Human rights, I want peace and harmony among religious people, no Hatred and no low esteem for pagan and monotheist. I want strong action aganist terrorism, religious fanaticism, and other demoniac force thats responsible for unrest and chaos over this world. be with me to fight the wrong.
Posted by Respectable at 11:25 PM No comments: